Following on from my last blog I thought I’d expand a little bit on the non-standard DIY and why hanging a picture is almost child’s play. I say “almost” because it’s usually the simplest most straightforward things that we never get finished. Knock down a wall, you say? Move a radiator? Fit a window? Consider it done. Fix the wobbly door handle…. not so much. On reflection, it seems that we always go for the most impactful items on the to-do list. Why solve little annoyances when you can leave them and win big on something else.

Winning big is exactly what we had in mind when in late 2012 we embarked on The Extension.

The Extension, in it’s original form, was to be our kitchen. By the end of the project it had included the kitchen, the front porch, an ensuite, complete new bathroom, redecoration in every room, rainwater harvesting system, full external insulation and render, fencing, patio, garden, driveway and a fabulous Victorian tiled hallway. Barely a brick has been left untouched in this little house.

We had our planning permission and building control engagement, but with precious little else in the way of planning we approached it in true Bray style (although I was still a Smith then) – with an SDS drill, a crowbar and a lot of enthusiasm – and set about destroying the old front porch/hallway a few days before Christmas 2012. This left us without a front door so if you could navigate the muddy pit you could walk from the front garden into the living room.

Before sending you off into a complete panic on my young, naive behalf, I should highlight here that we weren’t completely without experience. Matt had spent a few years working with his brother as a general builder. Although singlehandedly completing nothing on quite this scale before, he was completely unfazed and completely capable of delivering. I was also extremely proficient with the kettle.

I think the porch foundations were poured on Xmas Eve, and on Boxing Day our friend Phil the bricky started with the block work. Early details are a bit hazy now – I wish I’d had the presence of mind to blog then! – but I do know that it rained. A LOT. For several days our entire electricity meter/consumer unit was wrapped in a tarpaulin and hanging outside in the elements. Late afternoon on a Sunday in January, it was zero degrees, and Matt and I put 2 tonnes of frozen ballast through the cement mixer by hand in order to pour the floor. You had to hand it to us, we were committed. 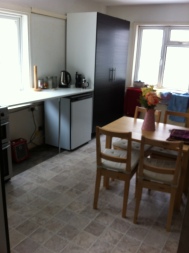 February 2013 saw the creation of the temporary kitchen in our bedroom, whilst we had relocated ourselves to the recently vacated “Jamie’s room”. It’s fairly normal to set up a functional kitchen space for a short period of chaos in order to feed yourself soup & toast or the odd pot noodle. Matt’s optimism was balanced out by my realism, and we agreed that we were likely to need this set-up for a few months at least. In order not to drive ourselves completely crazy, and still be able to provide some sense of family normality for Soph, we assembled a fully functioning kitchen, complete with full size electric double oven, fully plumbed dishwasher and washing machine, and more worksurface and cupboard space than we had in the old one. To be honest, compared to the old one, the temporary one was a massive upgrade. Glad we invested the time and energy into it though. Our “short period” lasted 10months!

It snowed in March 2013. I remember this very clearly because it was snowing when we started laying the blocks for the rear (kitchen) extension. Having already turned the entire back garden into a quagmire with the mini digger, a little bit of snow wasn’t going to put us off. Wearing almost all the clothes I owned, topped off by my bargain £10 Tesco sale ski jacket in cherry red, I got outside and got stuck in until the sun went down.

That pretty much sums up 2013, 2014 and most of 2015. For days and weeks and months on end the two of us grafted. Through our entire project, I think we only had the blocks, the plastering and the rendering done by tradesmen. We took the DIY very literally, and kept everything in house, relying a little on family and friends, but mostly beavering away with our bare hands. I joke that there isn’t an inch of this entire house that I haven’t touched, but if you called in the forensics I don’t think I’m far off.

I remember someone stopping by to talk to us when we were working outside once, and commenting on our progress. In fact a lot of people used to stop and chat, or wave on the way past. I felt like the whole neighbourhood was rooting for us to finish!

I could go through my memory archives and give you chapter and verse on the project, but that probably isn’t what you’ve come here to read about*

(Note*: We have a couple of years worth of fabulous timelapse videos showing all of the work. In case you want to see that, and the proof of my little red jacket clad form scurrying about, drop me a message)

I will summarise by saying that it was the hardest and most exhausting time (we were both employed full time throughout) but that I think it an absolute testament to the awesomeness of our relationship that we properly SMASHED IT. Despite having no real documented plan, and not following a budget :-0, we made well thought out decisions, were totally aligned in almost all of our thinking, didn’t fall out once, and created the most fantastic and perfect home we could imagine. Yay us.  Seriously.

As well as working full time, I was – somehow – also juggling the care of darling Milly bear, alongside all this frenetic building work. We still walked, we still trained, we still cuddled on the sofa. I was completely exhausted, my hands, arms and legs were scuffed and bruised, I had brick dust in every drawer, pocket, handbag. How on earth I managed to be presentable enough for work I’ll never know. Maybe I wasn’t! But nobody ever said and I’m still there now…

Although very wrapped up in the whole project, because it was impossible not to be, I was still very mindful of the impact on Milly. There was tremendous upheaval – from the relocation of rooms inside, to using the side door as the front door, to having no fence, and a garden that barely offered a blade of grass for a bedtime wee.

d at the end of the road for the first and last toilet breaks of the day. On a few occasions we had to go out during the night as well. Didn’t seem to matter to her but I must’ve made a rather fetching sight in my PJ’s and rigger boots.

Despite all of this chaos, we managed, and most importantly, so did she. I know I’ve said it before but I really think this comes back to the point I’ve made about her just needing to be with me (or with us). I know by most that may not be considered wholly unusual – man’s best friend and all that – but given Milly’s extremely complex character and very sensitive disposition, I think it speaks volumes of the bond that her and I had. 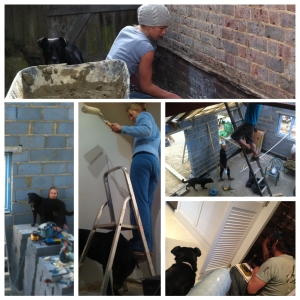 I do have to make a call out here (again) to my incredible parents. During some of our toughest months they came through with literally everything. Hard manual labour, endless lunches and supplies, homecooked meals batched and left in the freezer, cleaning. The lot. What they also stepped in with was some respite care for Boo. They started having Milly overnight for one or two nights a week. I think they realised I was in danger of burning myself out, and if by having Milly they could allow me an extra 90mins in bed in the morning then they were happy to do it. Of course they also loved having her at their house (noting that they had previously made all required modifications to Milly-proof the garden etc). They used to drive the 70mile round trip to collect her, and then the same again to ferry her home a day or so later. Although we really missed her not being here, it just eased the pressure a little, and helped us to motor on at some critical points. Once things got marginally calmer we started sharing the transport a bit. We used to meet at the then newly opened Cobham Services on the M25. It was probably equi-distance and enabled us both to leave and re-join the motorway in our opposite directions. We would meet in the same quiet spot in the carpark, and hand over our precious cargo. Usually at the point of transfer my mum would, in exchange, hand us a bag of food. Either yummy dinners that she had cooked and frozen, or high energy treats to keep us going. We were so very lucky to have their support and we could not have done any of it without them.

There were plenty of times that I felt completely overwhelmed, often to the point of tears. At one time I had a complete meltdown that the Milly basically had NO GARDEN and it wasn’t fair – she might not live all that long – and we absolutely had to do something about it. I think I was ranting, crying, pacing and gesticulating. Matt would’ve been calmly observing whilst I got more and more worked up.

My panic subsided.  Matt usually has that effect.

Anyone who has been involved in any sort of project like this will understand and appreciate the stress we were under. Even living through it when you have builders in is hard enough, but being the builders was full on. When I look back now I wonder what on earth we were thinking!! I feel a little sick just thinking about it and can’t believe what we put ourselves through. However hard it was though, we stuck together, all of us. There were hugely challenging times when we thought it would never end, but there were plenty of smiles and laughter as we were building our home and making incredible lasting memories along the way.

We have bounced around the idea of moving – our home is absolutely perfect – there is not a single thing I would change or do differently, but the road is busy, our garden is small and we are very overlooked. If I could pick our bungalow up and set it down in 10 acres that would do just nicely. I know I wouldn’t be happy in another house until we had made it “just so”.. and I’m not sure I could do it all again! On top of that is the Bray family history (Matt’s dad was born in the Bungalow) and the love and energy we have invested here… I think we would find it very hard to let this place go.

For now we stay put and enjoy our home and everything in it. So many happy times have been had here, and although things aren’t so easy right now, the Bungalow, like us, will have to come out of mourning and open it’s doors to the world again. I know we must try to move forward, but when we do look back I am so pleased that we can do so with extreme pride at all we have achieved and how one very special bear took all this so seamlessly in her stride. 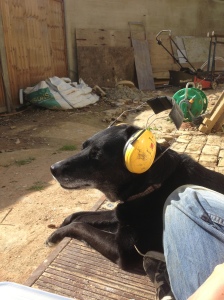