Despite seemingly “settling in” at home very well and very quickly, looking back Matt and I realised that it actually took quite a long time for Milly to come out of her shell. We think it was probably the best part of a year before her little dogonality was fully revealed. This is a largely uneducated guess but we attributed this to her being highly stressed and almost shut down when she was in kennels. I don’t know if there is such a things as Canine PTSD (?) but it wouldn’t be unreasonable to expect that, after months of being in kennels with/near the enemy (all other dogs), Milly might’ve been suffering from it.

When I look back now, I can’t quite put my finger on why we felt that she wasn’t herself for so many months, but we definitely discussed and agreed on this some years back now, so there must’ve been something, or a number of things, that made us feel that way.

Similarly, I guess it took me some months to adjust to my role as a doggy mummy. With hindsight I realise that I actually had no idea what I was doing beyond the essentials.

From day one I was absolutely meeting the most fundamental and basic needs of a dog: Food; Shelter; Exercise. I took those duties very seriously.
I was also dishing out a bucket load of affection and ardently following her around with my camera phone to ensure that I captured those all important “firsts” and cute moments.

I’ve never seen someone look so unimpressed at a first aid attempt.  I’m sure that special bootie cost me the best part of a tenner.. and lasted on her foot for all of 4 minutes. 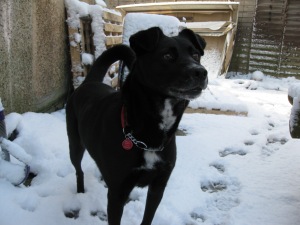 There’s something extremely cute about paw prints in the snow.

Wasn’t a favourite.  Like a lot of dogs Milly loved a muddy puddle or a slightly stale pond, but give her a warm bubble spa bath and a fluffy tumble dried towel and she was unconvinced.

Despite really loving her and caring for her, I didn’t actually have much of a bond or connection with her in those early months. She knew I was the food provider and the boss in the house but that was about it. Something that probably made it considerably more difficult to build that connection was the fact that she was literally unrecognisable and unpredictable out of the house. In truth, I was possibly a little bit fearful. Not of her directly – I never ONCE thought she was going to turn on me. But the fact that we stepped out of the house and she immediately became a different character made me feel uneasy I guess. Just as a loose point of reference I’ll liken it to someone who has been drinking excessively…. people can “turn into” something or someone that you don’t recognise. You aren’t scared of them, but you can be a little scared by the drastic change. When the alcohol wears off, or in Milly’s case when the back door shut behind her, they are again themselves and, probably – through sheer relief – you forget all about it.

I didn’t knowingly feel scared – but now I have all the time in the world to look back and over-analyse I can come up with these things. Hindsight eh.

Despite having a Jekyll and Hyde for a pet, I was largely unperturbed, and just ploughed on doing what I had to do. I never regretted anything but looking back I was out of my depth with “special dog” ownership.

I was, however, in the extremely fortune position of knowing a superstar dog trainer, and I went to her to receive some very basic but crucial guidance.

After completing my GCSEs at 16 I went to college at Brooklands in Weybridge. It felt super grown-up at the time.. it was a campus college and not attached to a school, the tutors were tutors not teachers and known by their first names, you only had to be there when you had actual lessons, and my Economics tutor – the infamous BOB – used to regularly send us home from class early so we (or he?!) could go to the pub. It was at Brooklands, and in Economics, that I met Michelle. Michelle was from Goldsworth Park Woking (I can still remember her home address from 20 years ago!), and despite being only a few months older than me, she seemed much more worldly wise than I did. The unexpected free-time that Bob used to give us was often spent honing our American Pool skills at Planets in Woking with other friends Gemma – my best friend from home – and Paul, who Michelle knew. Blimey weren’t those carefree days.

Michelle and I got on well from the beginning, although we had a momentary glitch when she snogged my ex-boyfriend on a Geography field trip in France. I wasn’t best pleased at the time.

At home Michelle had a lot of dogs – I’m going to punt at usually 5/6 at any one time – because her mum was/is a MASTER trainer. From what I knew or understood then it was mostly agility training, but I think she has done every kind. I confess I was too busying thinking about boys and driving and parties to pay too much attention to the dogs, although we did visit her a number of times when they had puppies because Gemma was a major animal lover.

Michelle is petite, proper cute (still now) and looks like butter wouldn’t melt, but she has the fastest tongue of anyone I know. There is a superb story of her Year 11 Prom (or some other school organised party). I hadn’t heard of it, but Michelle went to one of the more down-to-earth schools in Woking (not dissimilar to my Sunbury Manor experience I think).

So legend has it, at said school party, things got a little heated at the end of the night and security were brought in complete with their ferocious guard dogs.  Tiny Michelle was surely front and centre of the commotion. When faced with the threat of having the “dogs set on them” Michelle took one look at the snarling, barking hounds and delivered some quick-witted & frankly cheeky response to the security guard before proceeding to call one beast over for tummy tickles and a chin rub. Whether it was actually her dog whisperer talents or just her bolshy confidence that told her she wasn’t going to get savaged I’ll never know, but she walked away unscathed.

Anyone who can talk down a guard dog was pretty impressive in my 17 year old mind, and this story still makes me chuckle out loud to this day.

Michelle wasn’t hugely committed to studying at that point in her life, and after just over a year or so at Brooklands she left and started working full time in Mr Cod. Michelle had enough courage and self-belief to try her hand at something different, and she went on to qualify as a Financial Advisor, sit A-Levels, study for a law degree and complete her Masters. It wouldn’t surprise me one bit if I saw in the paper that she was running for Prime Minister.  I do actually think she would make a cracking job of it.

Oh, and she is also now an awesome Mummy to two beautiful daughters. Last time I saw them, her eldest girl was certainly showing signs of the same quick wit her mummy has…. good luck Michelle & Tim!!

So, back to 2010, it was Michelle’s mum – who was living just a couple of miles away – that I turned to for advice on Milly.

She was never going to be a flyball queen, but I came away with a much better understanding of some of the basics. I learnt that “assertive” was just that. It wasn’t angry, or mean. It was just assertive and confidently in charge. It is said that it can cause more stress to a dog if they don’t know who their pack leader is. Drawing on her Collie genes, Milly proceeded to master various commands with me, including but not limited to: Wait (obvious), Close (turn 180degree at heel), Touch (my hand with her nose), Down (again, obvious). 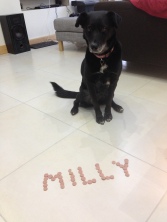 Milly proudly showing off her “wait” command in 2014.  Took me 5 attempts to get this picture before she was allowed to snaffle the hot dog lettering.  I felt very proud of her.

Amongst other things I also learnt from Liz that it would be hugely beneficial if I was relaxed and happy, and she had me giving upbeat chitter chatter to little Milly on all of our walks. Milly never chatted back, but I’d give her a run down of my day, my shopping list or anything else that I could deliver in jolly sing-song voice. Despite feeling like a bit of a nutcase at times – some youths in town once mocked me after observing “listen to her, she’s talking to her dog” – there is no question that Milly and I were seriously bonding over the months that followed.

Although I wasn’t able to influence her reactivity towards other dogs at that time, her and I were having a better time of it out of the house and our relationship was progressing nicely. Whether she would’ve admitted it or not, I know I stopped being just that annoying and slow human on the end of her lead… it didn’t take too long before I was Milly’s proper mummy.

I also need to mention here that Michelle’s immediate reaction on hearing about my loss of Milly was to drop absolutely everything and head over to my house.  Busy lives and commitments now mean that we don’t see each other or speak from one month to the next, but in one single text message she reminded me why she is, and always will be, such a good friend.  As it happened I had forced myself into the office the very next day in order not to be home alone so Michelle didn’t need to make her emergency visit.  But that fact that she was going to, and I know would’ve exactly done the same had I messaged her at 2am not 9am, meant so much to me.  Thank you x