Courtesy of modern technology, and despite repeatedly turning off location settings on my phone, I received an uninvited weather alert whilst I was at work yesterday morning.

As it was, it turned out to be completely inaccurate, which isn’t really unexpected because it often feels like you can never actually trust the forecast anyways. Yellow warning for thunderstorms was the notification received. Yesterday I just shrugged and thought “oh right, didn’t bring a coat, nevermind” but dial back a few years and this message would’ve received a different reaction.

In addition to her dog-phobia and generally high levels of anxiety it probably won’t surprise you to learn that Milly was also noise sensitive.

The Kenwood mixer and SDS drill were among her least favourite noises, as well as the more traditional triggers of fireworks and, of course, thunder. As such, a forecast for thunderstorms could not have been ignored. So on receiving a text like I got this morning, I would’ve implemented my own little version of a crisis response.

Starting with, where was Milly? (Remember she used to go to my parents pretty frequently back then) If she was at home the second question was where was everyone else and when would they be home? Number one choice was always for me to just go home and work from there, because that was a pretty easy, but if for some reason that wasn’t an option there may have been calls to my parents to go down, to Jamie to go home at lunchtime, to Jean and John next door-but-two to pop in, or to Matt’s mum to check up on her. Yesterday there were no such questions and no phonecalls, but my cogs were whirring and my brain was remembering…

Like everything, noise sensitivity is individual, and the reaction differs from dog to dog. The mixer just prompted Milly to retreat to the other room, the drill was mostly the same but could also trigger frantic digging at the carpet. Thunder and fireworks brought about the most extreme reaction.. pacing, panting, barking, hiding, digging and – basically – what I would describe as “considerable distress”.

When I was growing up, fireworks were reserved for organised displays on 5th November and on the TV over Big Ben on New Year’s Eve. Now however, in 2018, we seem to have to endure fireworks every weekend from mid-October to mid-November, and with them being so easily available – like in Tesco when you pop in for a loaf – all and everyone seems to go in for back garden fireworks.

I’m not against fireworks, but I am against causing unnecessary distress to people or animals just for the sake of it, and so am wholly supportive of the campaign for noise-free fireworks. When you’ve seen your beloved pet in an absolutely state hiding under the bed and scratching at the carpet like her life depends on it, all because someone wants to watch a few whizz bangs, it kinda changes your perspective. And it’s not only pets that can suffer such mental anguish. Pretty timely as our US friends close out their Independence Day celebrations, but fireworks can have a very negative impact on those suffering from PTSD like veterans and survivors of terrible attacks.

For some people and for some dogs, everyday life can be struggle enough, without throwing in this sort of extreme stimulus. So it’s a no from me.

Thankfully fireworks, whilst sometimes unexpected (e.g. at teatime, on a Tuesday, in October), are pretty much guaranteed to have an end point. And other than on NYE, they are usually not too late in the evening, so it’s pretty easy to draw the curtains, whack up the stereo and have a disco for 2 in order to mask the noise.

Thunder, on the other hand, is a bit of a different beast. Eliciting the same suffering and, for Milly, the same very physical response, but decidedly less predictable.

Our first significant thunderstorm experience was during the night, and with Milly pacing, barking and unable to settle there was zero chance of me settling either. There was also no “comforting” her either. Not that you are supposed to do that anyway – apparently that can act to reinforce that there is something to be worried about.

Alas there was nothing for it but to get up with her. So into the lounge we went. Curtains drawn, lights on, Tragic FM (as Bridget called it) playing through the TV, I fashioned up a little floor den with a spare duvet and some blankets between the sofas.

Eventually Milly settled down, and the thunder stopped, and we both fell asleep. On waking in the morning she showed no ill-effects from the disturbed slumber, and luckily had nothing in her diary other than a day on the sofa, so catching up with any lost sleep was no drama. In stark contrast, I could barely move where I’d nodded off in a seriously awkward position on my side on the carpet and was completely knackered. Facing a day in the office my only option was to slap on a load of concealer and hope that the storm was for one night only!

Over the years we had a number of similar nights, and I got pretty well practiced at den building, remembering to pull the sofa cushions onto the floor as a starting point to give some padding to my poor hip bones.

As well as helping us with T-Touch Jacqui also introduced us to the awesome invention of the “Thundershirt” – google it for more details – but in short, it is a very snug dog jacket that works to promote calm, similar to the effect of swaddling a baby. Originally developed to help with Thunder and fireworks, it is now recognised to help in all sorts of different anxiety situations. I know what you might be thinking… “as IF”. but I promise you IT WORKS. On wrapping her cosily in her Thundershirt, Milly immediately changed into a calmer state. 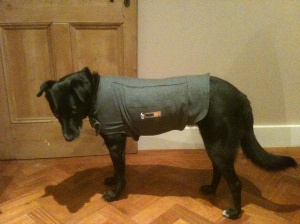 It became a staple in our toolkit. For a long time she wore it on walks and when travelling in the car.  We also combined it with a loose fitting elastic strap across her nose – another recognised calming technique.

The Thundershirt alone didn’t “solve” Milly’s anxiety issues, but in conjunction with all of our other training and techniques, it definitely helped.  So at the first sign of fireworks or thunder I’d whip it on her, as well as implementing the usual noise blocking and light shielding measures.

Interestingly, we discovered that Milly could tolerate thunder during the day without batting an eyelid. One afternoon when my parents were here (doing DIY for us if I recall) a storm came over and according to their eye-witness reports, which I consider to be wholly reliable 😉 , she was completely unperturbed. This new information changed the criticality of my emergency action plan, although it was still my preference to get home if I could… “just in case”.

Summer 2017 brought a couple of stormy nights, and these are my most recent thunder memories. Although still aware of the noise, and still not entirely comfortable, there is no question that her reactivity had significantly reduced by this point.

The living room den was no longer required but Milly was still looking for a safe space when thunder struck at 2:43am.  Given the clutter under the bed, her immediate choice was to head for the tiny gap between the mattress and the headboard.

But that was never going to work!

So after a quick reorganisation of some underbed storage (launch it out of the room onto the dining table) and the laying out of a special pad in case of accidents, by 2:50am she was safely under cover, although looking rather worried.

Eventually my baby girl was content with settling herself under my bed in her Thundershirt and by 4:51am normal nocturnal activities had resumed. 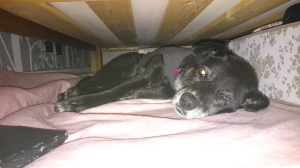 I really want to attribute this to the dialing down of her general anxiety level as a result of all of my mega efforts at rehabilitation, and so give myself some congratulations.

I probably am entitled to part of the recognition, but being realistic I know there is probably a good dose of hearing loss and, as Matt used to observe with a loving smile on his face, “she just old and she don’t care”…